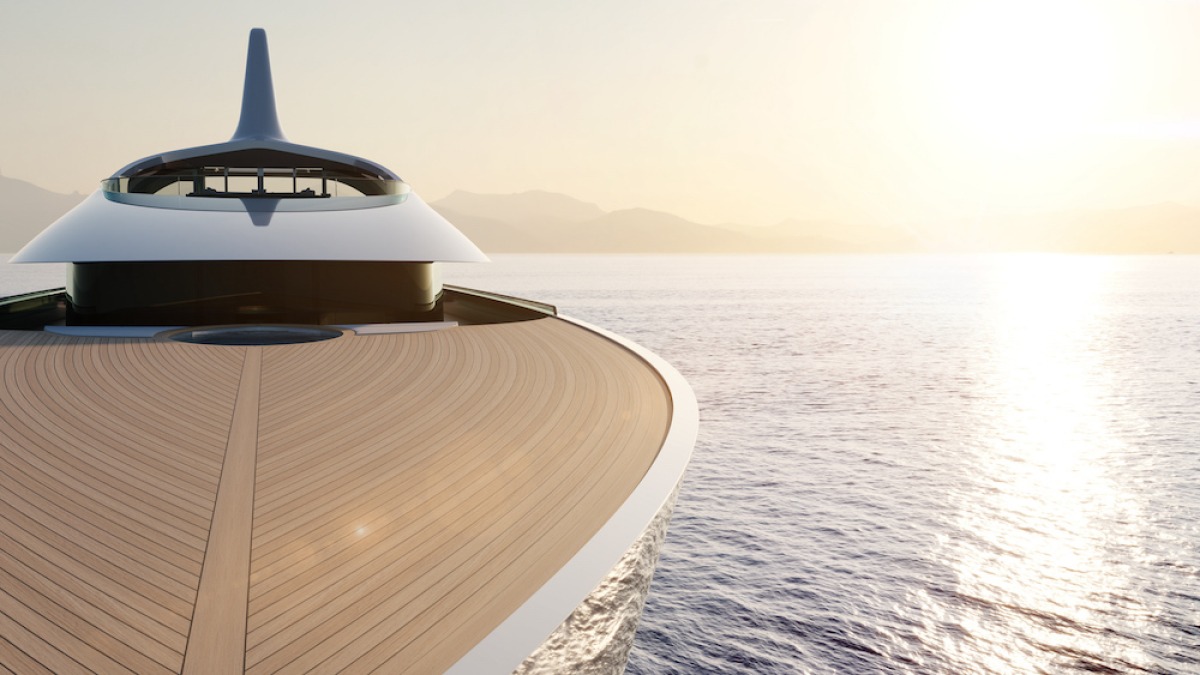 In it, Feadship outlines its evolving history in hybrid propulsion, leading to “the world’s first luxury motor yacht with hybrid power”, the 83m Savannah, in 2015.

So much else has happened since then, and Pure takes a deep dive down this path. Among hundreds of innovations, Pure has no conventional wheelhouse. The yacht is controlled from a concealed Command Centre, from where everything is simulated and displayed on screens.

“The information required to drive Pure will come from all kinds of sources, such as radar, AIS, maps, depth sounders and cameras strategically placed around the yacht,” said a spokesman.

It should be an interesting Captain’s Night this year, another feature at Dubai. Lürssen has likewise imagined a 98m yacht called Alice, whose advanced fuel cell technology will allow the vessel to slowly cruise a 1,000nm coastline, or spend 15 nights at anchor, emissions-free. Yard owner Peter Lürssen sees private motor yachts and commercial ships being emissions-free in the near future.

He describes the process as using hydrogen re-formed by methanol to produce a revolutionary fuel cell system. The waste is nothing more damaging than warm moist air. The new set-up replaces conventional diesel generators on board. For higher speed and energy demands, an additional methanol engine is added.

Another astonishing idea stems from owners who say they don’t really use the formal lounges and dining tables on the principal deck, preferring more casual upper deck facilities.

“Then why not re-think the principal deck altogether,” says Lürssen lead exterior designer Jim Sluijter, “opening it up to parks and ponds, and creating a unique ecosystem aboard.”

Damen Yachting is sending a senior management team to share latest designs from the Amels 60-120m range, as well as showing off its SeaXplorer and Yacht Support vessels, and refit capabilities. They are introducing a brand new design in the Yacht Support range, starting with a 53m vessel to be delivered in 2023.

“The YS 53 marks a significant shift in Damen Yachting’s strategy,” says Rob Luijendijk, Director of Sales and Product Management. “Over the last decade we have developed a very experienced Yacht Support team with a deep understanding of how to help our clients. We realised our new series needed to be not only highly flexible and customisable but also designed from scratch for the yachting market.”

Under 500GT, the YS 53 will carry 6-12 guests or up to 16 staff, plus captain and crew. The vessel features a huge 15-tonne deck crane and two Rolls Royce MTU main engines delivering a total 4,480kW (6,000hp) for a top speed of 19 knots. The vessel will also be IMO Tier III compliant, reducing harmful emissions by 70 per cent for full range operations.

Oceanco is among other leading Dutch yards taking part. Their 90m futuristic yacht called Kairos, designed with Pininfarina and Lateral Naval Architects, made its debut in Monaco and reappears in the Superyacht Avenue at the Dubai show. Oceanco CEO Marcel Onkenhout says it “taps into latest developments in technical and propulsion systems, while reflecting how our experience of living spaces is changing”.

Holland Yachting Industry, the trade group, consolidates a separate exhibit. From Italy, Ferretti Group has its CRN and Custom Line in the superyacht business, and Azimut-Benetti, whose vessels have plied Middle East, Indian Ocean and Asia-Pacific waters for many decades, are once more represented, as is Sanlorenzo, now standing out strongly in the global market.

Add Westport from America, Sunreef of Poland, Princess from Britain and Numarine ex-Turkey, and the choice for visitors is wide.

The Emirates’ own builder, Gulf Craft, has come a long way since its early days, and its increasingly larger superyachts in the Majesty range are selling well around the world. Home advantage is useful in Dubai, and visitors can make arrangements to tour the yard at Umm Al Quwain.

A Majesty 120 will be displayed at the show. Apart from owners’ and VIP accommodation, this vessel unusually has five large guest staterooms designed asymmetrically, and the layout is worth a look. The best-selling Majesty 100, described by Gulf Craft as its “superstar”, is also being shown, along with the Majesty 62.

The show runs from March 9-13 and starts at 3pm each day, closing at 8pm on the first two days and the last night, and 9pm on the Friday and Saturday.

Dubai, which like other predominantly Muslim countries has a religious holiday on Fridays, announced last December that it would adopt a 4½ day working week from Monday-Friday, in common with many countries with which it does business. Friday now ends at noon, and Saturday-Sunday is a free weekend.

Says the introduction to the event: “Dubai International Boat Show is the premier and most established boat show in the UAE, GCC and Middle East. Whether you want to buy a boat, discover luxury yachts and superyachts, explore the latest diving and aquatic innovations, or ride the sparkling waves, it’s the definitive event for luxury and lifestyle.”

Apart from sections already mentioned, there is a hard standing area as well as in-water exhibits, yachting conference, entertainment handled by Nikki Beach, a water sports village, fishing competition, marine art gallery, VIP Lounge, trade contacts at Equipment Supplies and Services, and other amenities such as a children’s playground. It’s also co-located with Dive MENA Expo, the only dedicated show for the UAE and GCC diving community.