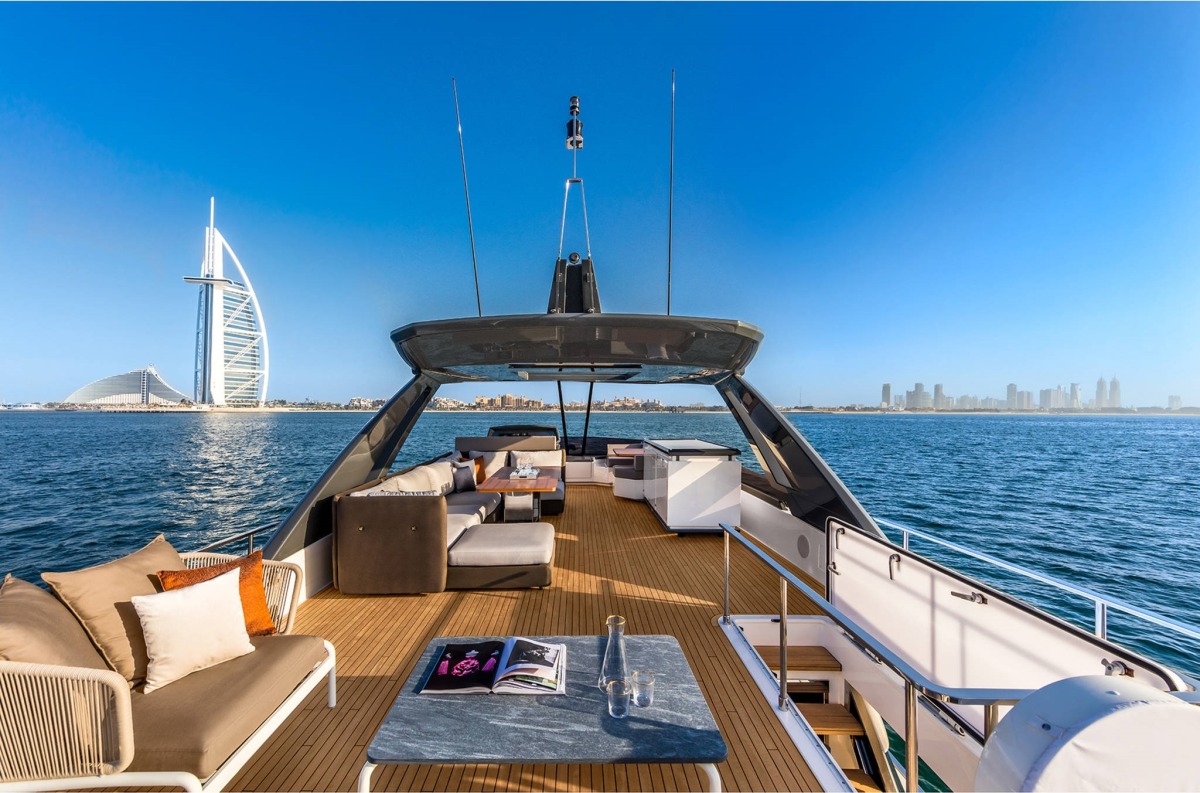 Singapore is home to Asia’s first two units of the restyled Ferretti Yachts 780, which features a refined exterior and exciting new interior options by IdeaeItalia that match the ‘Just Like Home’ concept introduced on the brand’s 500 and flagship 1000.

However, continuing demand is also because the 780 has recently been enjoying a second wind as the newly restyled version launched last year features the same ‘Just Like Home’ concept introduced on the 500 and 1000, the brand’s first two models with interiors by IdeaeItalia.

In fact, two owners from Singapore were the first in Asia and among the first around the world to benefit from the restyle of the 780, which is built in Cattolica along with other 20-30m Ferretti Yachts models including the flagship 1000.

Both clients ordered their yachts though Singapore dealer Hong Seh Yachting in April 2020, when the pandemic looked like it was here to stay, and people quickly realised that weekends and holidays would be spent in their home nations for the foreseeable future.

The two almost-identical yachts — one hull is in ‘Custom Line white’ — are berthed at ONE°15 Marina Sentosa Cove, managed by Hong Seh Yachting and regularly used, with one owner spending three straight weeks aboard the yacht.

The Singaporean who booked hull 29 is a first-time yacht owner and last September became the first client in Asia to receive the restyled 780. The second owner was ordering his third Ferretti Yachts model and his new 780 arrived in Singapore in October, having been used for the restyled model’s world premiere at the Cannes Yachting Festival a month earlier.

The first owner of the new 780 was sold on the model after seeing an earlier 780 in Singapore, which had been heavily customised and features a lower deck with a large entertainment room and just two cabins.

Della Pearce, Director of Hong Seh Yachting, says: “It allowed the client to see first-hand how the 780 could be configured either with three or four cabins, and galley on the main or lower deck. These multiple configurations are unique for this category and stem from Ferretti Group’s experience of building larger yachts.

“The 780 appealed to our clients because of the yard’s flexibility to accommodate their customisations. It also helped that the model is RINA Category A, which allows her unrestricted navigation in open sea.”

Both the new 780s in Singapore feature the standard four-cabin layout and IdeaeItalia’s Contemporary mood interior, an upgrade option as opposed to the more colourful Classic, which is offered as standard.

Although much of the restyling is focused on the interior, there have been a few changes to the exterior such as an expansion of the main glazed surfaces in the hull, which gives the yacht a sportier look.

The fun starts at the swim platform, which can accommodate a tender up to 4.35m. The two panels can fold down separately or together to create a large waterside sofa, while the whole area can be covered by a bimini. To the side of each stairway are storage lockers that provide enough space to store a Seabob.

Side gates provide access to a cockpit with a forward-facing sofa and a table. Symmetrical side decks lead to a large and cleverly designed foredeck, where a C-shaped sofa faces an adjustable table and seating at the aft end of a huge triple sunpad. As at the other end of the boat, a bimini can cover the area.

The flybridge, reached by starboard stairs from the cockpit, is one of the yacht’s main attractions and remains a winning design. Both owners in Singapore have chosen a black hard top with a fixed plexiglass insert, while options include a panel system that can open.

For the restyled 780, the flybridge includes a larger central bar, which is situated to starboard and has the option of bar stools.

Opposite is the main social area, a C-shaped sofa and table, while the option for an extended sofa and dining table has been taken by one of the Singaporean owners. All exterior furnishings are from the Roda collection exclusively customised for Ferretti Yachts.

Forward of the bar is a flexible sunpad with moveable headrests that can convert into two facing sofas by removing the central pad, while to port is the helm station featuring two Poltrona Frau chairs.

The aft end is surrounded by clear railings and can fit a large modular sunpad or be left clear to fit sun loungers, the latter chosen for the two units in Singapore.

It’s the interior by IdeaeItalia that really brings the 780 in line with the newest generation of Ferretti Yachts models exemplified by the 500 and 1000, which also offer either Classic or Contemporary moods.

Classic’s warmer, more traditional colours are inspired by the island of Ischia in the Gulf of Naples, while Contemporary offers a more urban, modern look with cooler colourways inspired by Taormina in Sicily.

The main-deck interior features a long clear path on the port side all the way through to the raised pilot house, which makes for a nice sight line. The ceiling is clad in fine fabric and accommodates the new lighting design, with adjustable round spotlights plus three light cylinders in the dining area. Other new features include mirrored steel surfaces, electric window blinds and a hidden sound system.

The galley, also to starboard, is available in various configurations. The standard version has a fixed glass partition, while options include a closed version or a sliding glass partition that reveals a bar counter. North American clients can order a completely open version.

Inside, the galley features the hobs, oven and main storage areas forward, while aft is a large fridge freezer and a prep/serving area facing the dining table. The galley also benefits from multiple side windows including a small one that opens. A second layout option includes a day head just before the entrance to a galley with a different configuration.

In both layouts, the galley and other forward areas can be sealed off by a mirrored door that slides across from in front of the port door to the side deck. From the hallway, it’s three steps up to the raised pilothouse, which has a comfortable dinette to port and the main helm station to starboard, featuring two gorgeous Poltrona Frau chairs and three Simrad screens.

Technology includes the electro-hydraulic steer-by-wire system developed in partnership with Xenta and the integrated Loop system from Naviop-Simrad, which controls the main propulsion, navigation, monitoring and home automation functions.

The steps to the lower deck are opposite the galley and lead down to a hallway that starts aft with the entrance to the full-beam master suite, dominated by a large bed facing a mirrored TV.

On the port side is a comfortable sofa and the beautifully finished bathroom, which has twin sinks with Silk Georgette marble tops, big mirrors with integrated mixer taps, and a central rain shower. The starboard side of the bedroom features a desk-cum-vanity table, while aft is a walk-in dressing room, where a full-length mirror door comes into good effect.

The hallway leads up three steps to three en-suite guest cabins, starting with a twin to starboard, then a similar port cabin whose bathroom also acts as the day head. The VIP suite in the bow has an aft-facing bed, storage and hanging cupboards on either side, plus a bathroom to starboard.

Owners in Asia still have the option of an entertainment room in place of the master suite, as well as an open bar on the main deck, in which case the galley is located on the lower deck.

The well-hidden access to the crew quarters is concealed in the cockpit, underneath the starboard stairs to the flybridge. A hallway leads aft to an en-suite captain’s cabin (or storage space), to port to the crew cabin with en-suite, and forward to the engine room.

The standard propulsion is twin 1,400mhp MAN engines, which produce a top speed of 28 knots, but both owners in Singapore have the upgraded 1,550mhp versions for a top speed of 31 knots.

Other options include a joystick with docking mode, DPS (Dynamic Positioning System), a Seakeeper NG16 and Humphree fin stabilisers. New Ferretti Yachts models arriving in Singapore include a 500 and 550, while the brand’s next collaboration with IdeaeItalia is the upcoming 860, which will succeed the 850 and sit above the 780 in the eight-strong range.

“It’s an exciting time for Ferretti Yachts in Singapore and across Asia,” Pearce says. “All the new models with the IdeaeItalia interiors are proving very popular, so like all our owners, we’re looking forward to seeing the Ferretti Yachts 860 later this year.