Introducing: The Greubel Forsey Double Balancier Convexe Has Two Hearts That Beat As One 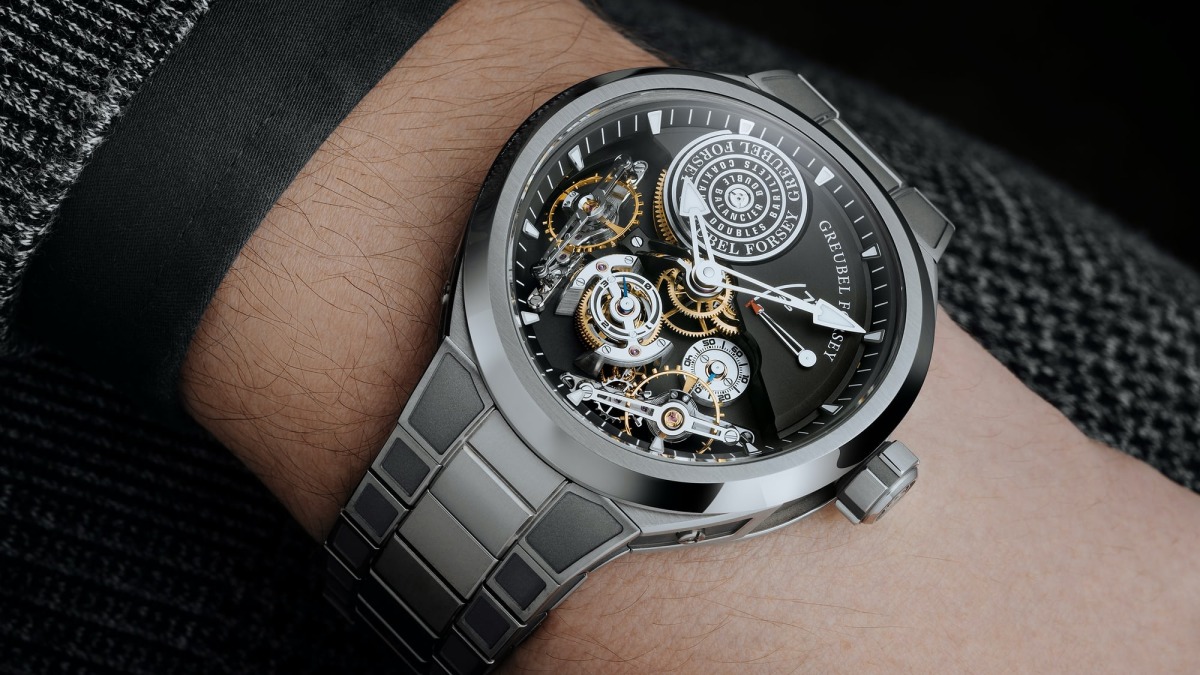 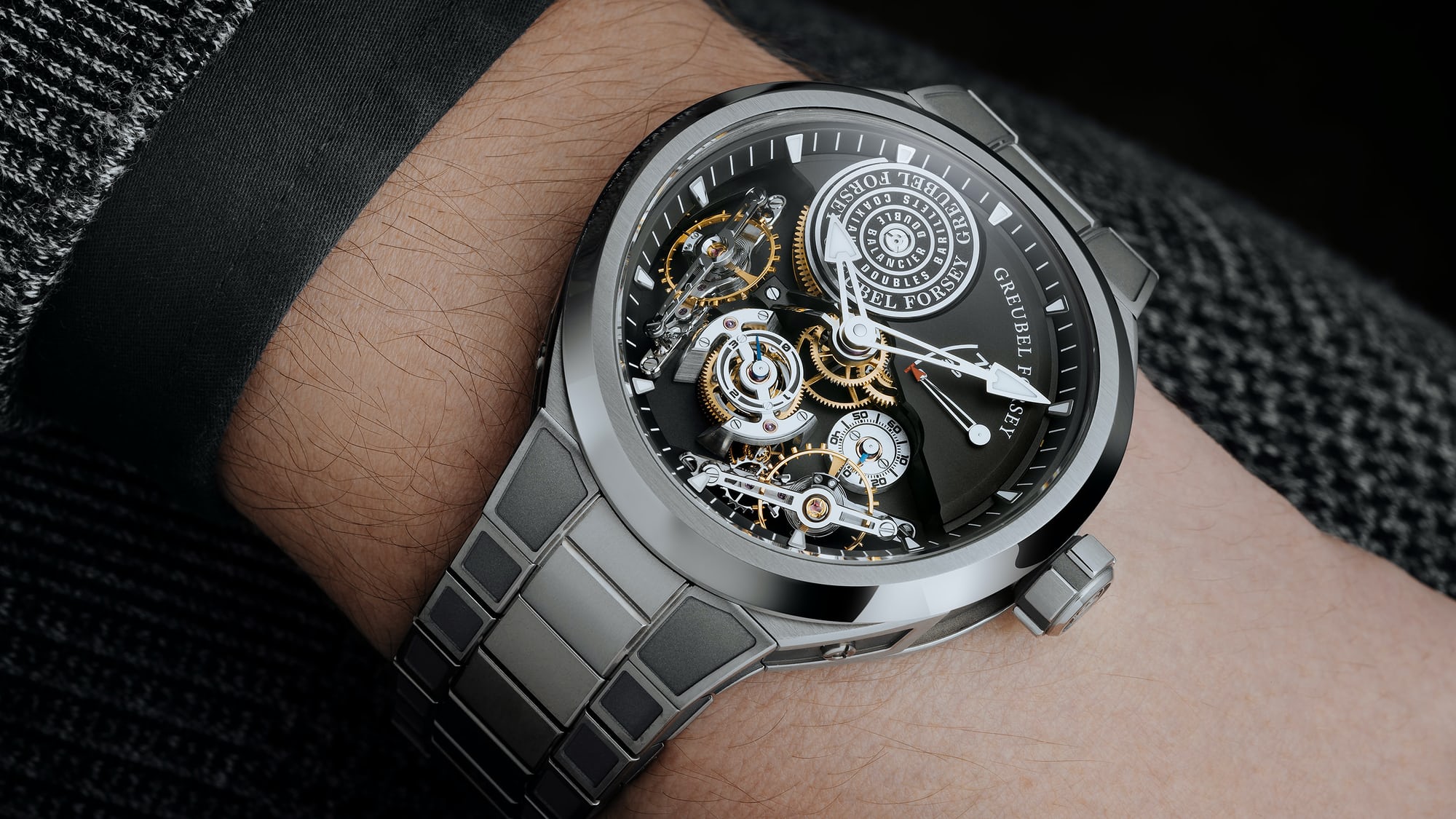 Stephen Forsey and Robert Greubel originally met at complications specialist Renaud & Papi (now Audemars Piguet Renaud & Papi) in the 1990s, and each found in the other a kindred spirit (although you would kind of expect to find lots of kindred spirits at  APRP if you’re interested in complications at all). The two founded their own complications house – Complitime – in 2001 and in 2004, launched Greubel Forsey. The company has made its mark making extremely ingenious complicated watches – generally, variations on the tourbillon, though not exclusively, and with other complications, as well – which are also hand-finished to an almost unbelievable degree. Their watches have generally not been anything you’d think of taking out for a hike or (God forbid) swimming with, but in recent years, the company has worked on creating watches that still have all the same technical and aesthetic merits you’d expect from Greubel Forsey, but with easier-to-wear cases and better water resistance. The Greubel Forsey Balancier S was introduced in August of 2020 and this year, the company is introducing a new version of the Balancier S curved case, fitted with double balance wheels, inclined at 30º.

The Double Balancier Convexe is, as is usually the case with Greubel Forsey, a large watch, at 43.50mm x 13.75mm (bezel diameter 46.50mm) but the titanium case, as well as its pronounced curvature, should make it much more wearable than you’d think from the hefty size. It’s also water-resistant to 100 meters which means you could actually dive with it if you wanted to (and I would bet real money that sometime in the next couple of years, someone’s going to). The dial side of the watch is where most of the horological action is, and if you like borderline mad-scientist horological experimentation happily married to top-tier haute horlogerie finishing, you’re going to love the Double Balancier Convexe.

The watch is, despite its generous deployment of the ol’ razzle-dazzle, fairly straightforward functionally – there are two hands for the hours and minutes, a subdial for the running seconds display, and a four-minute indicator for the differential that supplies power to the two balances. There’s also a linear power display at two o’clock. The two stacked mainspring barrels, supplying 72 hours of running time, sit under an engraved cover at 11:00, and the differential sits between the two balances.

The basic idea behind an inclined balance is the same as the thinking behind the tourbillon – if the balance is not in the horizontal or vertical plane exactly, you tend to get less variation between positions because the balance is never in one extreme position or the other (one of the earliest uses of an inclined balance I’m aware of is by the American watchmaker A. H. Potter, who made a tourbillon with inclined balance in around 1860, astonishingly enough). Greubel Forsey has created inclined tourbillons as well, including the Quadruple Tourbillon GMT (which, like Potter’s design, has the balances set at a 25º angle) but has also done interesting work with inclined balances. The ideal angle for canceling out rate variations would probably be 45º, however that would produce a very thick movement. You could get around this to some extent by using a smaller diameter balance but beyond a certain point this adversely affects precision, and so such watches are generally designed around a compromise value – in the case of the Double Balancier Convexe, 30º.

The idea behind using two balances is that even if one of the balances is in a completely flat or completely vertical position, the other will not be and the sum of their rates will be more precise than either one taken alone. The differential passes energy to both balances but since the hands of a watch are driven by the going train wheels, it also functions to average the rates of the two balances and produce a single rate which is displayed by the hands. The balances are free-sprung (i.e., no regulator, since it’s brought to time with the gold mean-time screws on the balance rims) with Phillips overcoil balance springs.

Every surface is finished, and very elaborately finished – screws, for instance, have chamfered heads and slots, and are polished on top, on the flanks, on the chamfers, and in the slots (which is a lot of polishing operations for a single component). Generally, Greubel Forsey uses a combination of very traditional finishing techniques and more modern finishes, and the classic gleam of polished steel and brass is complemented in the Double Balancier Convexe with the anthracite color of the titanium mainplate. The Double Balancier Convexe is a limited edition of 66 pieces and price at launch is $328,000.

This is a very specific approach to fine watchmaking and leaving aside the question of price, it’s not something that’s going to be up everyone’s alley even if you have the scratch to take one home. However, I happen to dig Greubel Forsey’s work a lot and despite the fact that I’m never going to own one (barring a bizarre unexpected, and highly unlikely stroke of good fortune) it still makes me happy that they’re out there. Full disclosure, the company lent me a Double Tourbillon 30º to wear to SIHH one year, and, a couple of years later, a Quadruple Balancier GMT for Baselworld, and in addition to having an enormous amount of fun just wearing them, it was extremely satisfying to see the reaction from exhausted, seen-it-all brand presidents when they spotted it on my wrist at meetings (it didn’t do a lot for staying on-schedule, but it was a blast all the same).

In recent years (I first met Stephen Forsey in person at a collector’s dinner in New York in 2006), the company has branched out somewhat from its origins as a bleeding-edge maker of multi-axis tourbillons, but pretty much everything they make is still an exploration of both the art of fine watchmaking and the science of chronometry. I’ll never forget the conversation I had with Forsey back in 2006 – we were seated next to each other and he gave me, over two hours, a one-on-one master class on the tourbillon. At the end of it, I asked him if it was really worth it to create such elaborate machines in order to gain a relatively minute advantage in precision and he smiled and said, “Well, Jack, you know, it’s always a struggle to gain more than you lose.” The struggle, though is also one of the most interesting intellectual entertainments in modern watchmaking, and the impetus behind creating what I think are some of the most beautiful watches ever made.

A limited edition of 66 pieces, to be made between 2022 and 2024; the first 22 now available through authorized Greubel Forsey retailers. Price, $328,000. Find out more at GreubelForsey.com.

To learn more about Greubel Forsey visit their website.