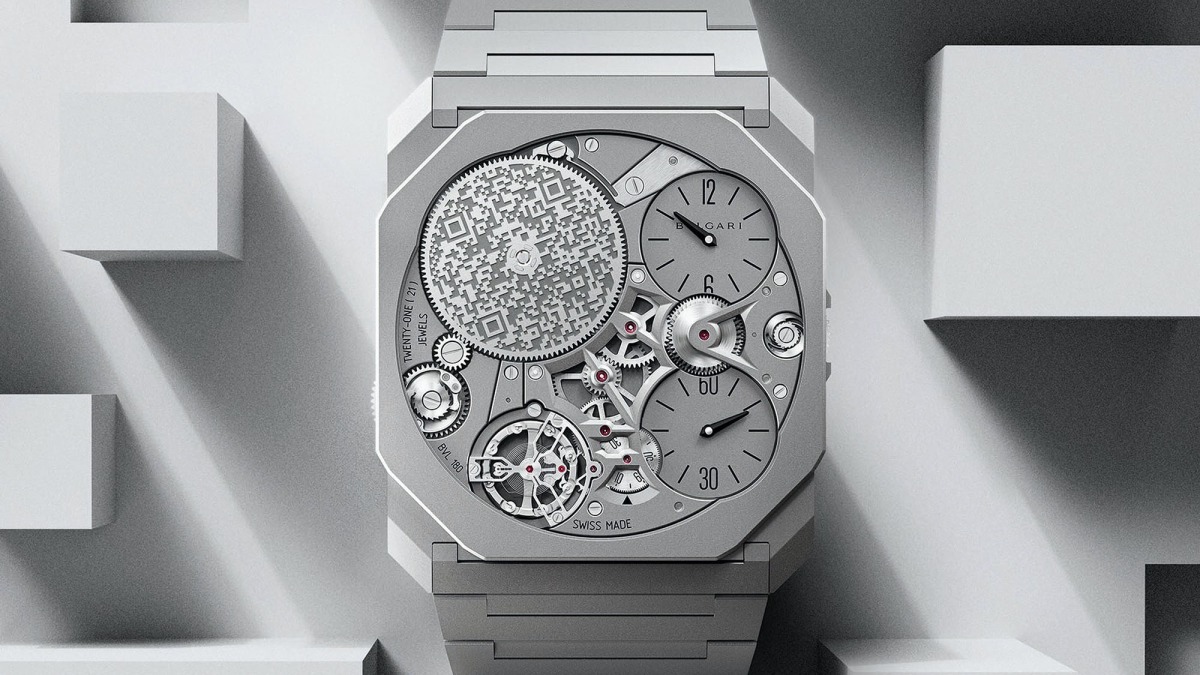 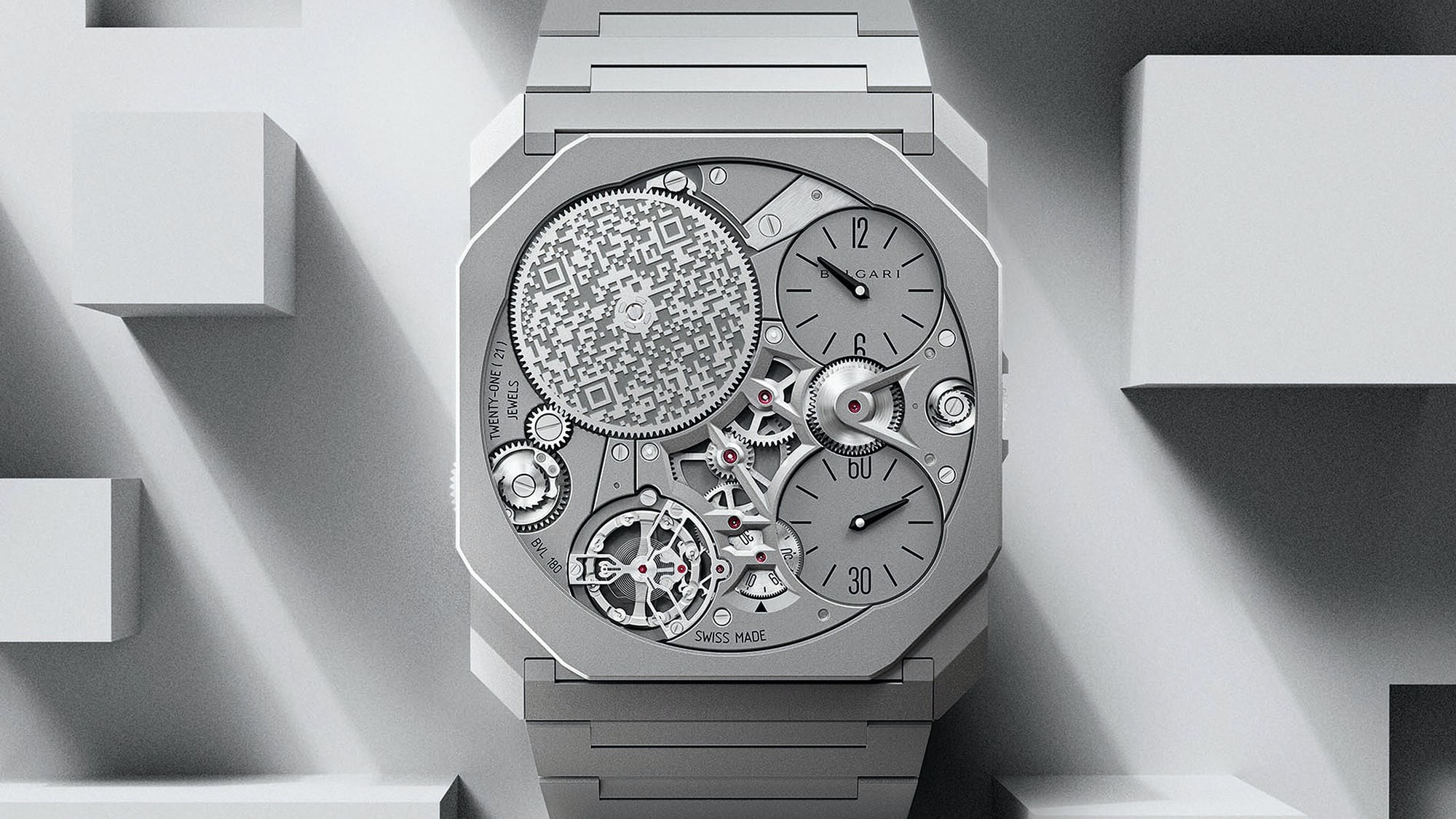 It’s hard to believe that the Bulgari Octo Finissimo collection has only been around since 2014 – that’s just eight years and yet the collection has become, in less than a decade, the cornerstone of fine watchmaking at Bulgari and as strongly identified with the brand as the Royal Oak is with Audemars Piguet, or the Nautilus with Patek Philippe (or the Speedmaster with Omega, or the Submariner with Rolex, as far as that goes).

Now, one of the things you’ll notice is conspicuously missing from this list is simply a record for the world’s thinnest watch, period. Up until now, that record has been held by the Piaget Altiplano Ultimate Concept watch. The Piaget AUC, which was launched in 2018, is just two millimeters thick, overall, and achieves that extremely reduced height by using the case of the watch itself as the mainplate. This eliminates the need for a separate movement – the entire watch is the movement, in fact, and the dial lies on the same plane as the going train, mainspring barrel, and keyless works. In order to make the case as rigid as possible for its minimal height, Piaget used a cobalt alloy, M64BC, which has a high percentage of chromium and molybdenum in addition to cobalt. 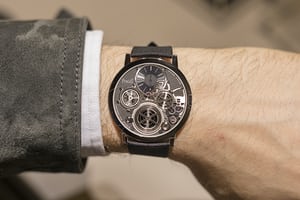 The Altiplano AUC is no longer the world’s thinnest watch, but it’s still an unusual piece of cutting-edge horological engineering. Check out Stephen Pulvirent’s Hands-On for more.

I had always thought that the Piaget AUC represented the last word in flattening out a watch, and it’s a surreal experience to handle one – one of the best descriptions I’ve ever read was from a HODINKEE reader who said that it looks less like a watch than a photocopy of a watch, which if I were Piaget I would take as a compliment. But of course, a record is no sooner set in watchmaking than someone sets out to try and break it, and today, Bulgari has announced the Octo Finissimo Ultra, which is just 1.80mm thick, overall.

The watch uses the same basic strategy Piaget used for the AUC, which is to suppress all components as much as possible onto the same plane and, in particular, to use the back of the case as the movement plate, as well. The entire going train is therefore visible and unlike the AUC, dominates much of the visible space, with the large, single mainspring barrel anchoring the composition at the upper left. The mainspring barrel is decorated with a QR code, prominently etched onto the barrel cover, which, when scanned, leads to a video about the watch with an NFT attached that makes it specific to that particular watch, as well as other assets. I don’t think I’ve ever seen an NFT implemented like this in the watch world before, and certainly not with such a direct and unmistakable use of a linking QR code as a decorative element.

The watch case – which, again, is integrated into the movement as a movement plate – is in three parts, with a titanium bezel and case middle, and a back/mainplate made of tungsten carbide. Tungsten carbide is extremely hard and much more difficult to machine than conventional watch case metals – in fact, it’s so hard that a lot of the time it’s used for the bits of cutting tools. In this case, it was chosen for its general toughness, but especially for its rigidity as any flexing of the case could cause gear teeth and pinions to bind enough to stop the watch. (Tungsten carbide is about twice as stiff as stainless steel). Thanks to its hardness, the tungsten carbide part of the case was machined by laser. The movement bridges, on the other hand, are constructed from traditional watchmaking materials. The integrated bracelet is titanium, as well, and only half the thickness of a standard Octo Finissimo bracelet.

The watch was created in partnership with complications specialist Concepto, and as Bulgari’s Product Creation Executive Director, Fabrizio Buonamassa Stigliani, told HODINKEE during a Zoom presentation last week, getting to a finalized design was something of a process. The basic idea of using the watch case as the movement plate was indispensable, but Stigliani says that when the first design was presented by Concepto, “the only problem was, it looked like another watch!” (Presumably, like the Altiplano AUC).

Stigliani says that after that Bulgari and Concepto started over, with a blank sheet of paper. “We are not obliged to make it round, we are not obliged to have three hands,” he remarked. After repeated rounds of revision, Concepto delivered – the movement fits the round aperture of the dial but with two cut-outs on the right for the edges of the hour and minute subdials, and with the central axes of the mainspring barrel, balance, and two subdials sitting on the corners of, if not an exact square, then a four-sided polygon at least.

The back plate/movement plate is milled out of a single piece of tungsten carbide, and has a kind of rounded rectangular outline. It fits directly into the bottom part of the case, which also carries the lugs. Between the case bottom and the bezel, there’s a very thin gasket, and then finally there is the bezel itself, to which is affixed the upper sapphire crystal. The entire case is a four-part sandwich: lower case (which is a kind of lower bezel, in a way), the caseback/movement plate, the gasket, and finally, the bezel proper. Clearances, as you might expect, are extremely tight – the crystal is just 0.3mm thick and the clearance between the underside of the crystal and the hands is 0.1mm. As a safety measure, there are two round silicon bumpers under the dial (at 3:00 and 6:00, as read from the mainspring barrel) which prevent the underside of the crystal from making contact with the movement if undue pressure is applied.

While the Altiplano AUC has a conventional dial for the hour and minute hands (again, suppressed to the level of the going train) Bulgari uses two individual sub-dials for the hours and minutes. There is a display of the running seconds as well, on a rotating disk.

The balance has a flat spring (overcoils are nice from a chronometric and craft standpoint, but they add height and are not found as a rule in extra-flat watches). There’s no regulator index either – fine adjustment of the balance is courtesy of adjustable gold rim weights. The balance oscillates under a three-armed balance bridge, with an integrated stud holder for the balance spring’s terminal curve. That bridge is also designed to act as an anti-shock system for the balance, replacing the usual arrangement of four jewels (two bearings plus cap jewels) and shock springs – another strategy for reducing height. The bridge is very similar to the upper cage of the Octo Finissimo Tourbillon (although in that case there’s an anti-shock system).

The escapement is a lever escapement, but with some modifications – specifically, the safety roller (a sort of metal hub that fits over the balance staff itself, like a wheel on an axle, and which prevents the lever from unlocking if the watch takes a hit) and guard pin (which interacts with the safety roller) have been omitted, which allows the escapement assembly to be thinner.

There is no conventional crown, which produces an additional saving of space in the movement as you don’t need the keyless works and clutch mechanism that let a standard crown either wind the mainspring or set the hands, depending on the crown position. Instead, there are two separate knurled, horizontal wheels – flattened knobs, more or less – set into the case flank. The one on the right sets the hands and the one on the left, at about 8:00, winds the mainspring barrel. There’s no neutral and 2nd crown position for the setting knob, so the driving wheels for the hands are separated from the going train by a differential – that way, setting the hands doesn’t interfere with the rotation of the train wheels. Right next to the knob and visible at 3:00 in the movement, there’s a small click wheel – it’s there not only to prevent the setting knob from being turned the wrong way, but also to provide tactile feedback when you’re setting the time (and to prevent the knob from moving accidentally, as there’s no neutral position).

Despite the engineering feats in the Octo Finissimo Ultra (there are eight patents pending), there are parts of the mechanism that to my eye look very traditionally executed. This includes the use of what looks like modified wolf’s-teeth wheels and clicks adjacent to the winding and setting wheels. There’s also a very traditional-looking click and click spring on the mainspring barrel ratchet wheel itself, albeit in a more rectilinear design than you’d find in a traditionally designed watch. Not to beat the word to death, but the steelwork in the Ultra has some very traditional polishing and anglage applied, as well.

Every ultra-thin watch represents a struggle, and that struggle is to somehow reconcile extreme flatness with a reasonable degree of accuracy and reliability. The basic idea for using the watch case as the movement plate goes all the way back to Audemars Piguet’s automatic tourbillon, caliber 2870, from 1986 and Concord used the same idea in its Delirium watches, as did Omega in its ultra-thin Dinosaure (both quartz). The flattest movement built as a separate mechanism from the case, with a more-or-less conventional architecture for the mainplate and bridges, is today still the Jaeger-LeCoultre caliber 849, at 1.85mm thick, and the Vacheron Constantin cal. 1003, which has the same basic design but comes in at 1.64mm.

Both these movements are both extremely flat and reasonably reliable, and moreover can be serviced with more-or-less standard watchmaking tools and skills. It’s a testament to how much Bulgari has pushed things with the Octo Finissimo Ultra that it is actually thinner (albeit by .05mm, but facts are facts) than just the cal. 849, without a case.

There have been thinner watches and thinner movements – the thinnest quartz Delirium was just 0.95mm thick and is, I believe, the thinnest watch ever made, and in the 1920s Vacheron produced the caliber 10726, which was a pocket watch movement, just 0.90mm thick. Both the Delirium and the Vacheron caliber, however, were extremely fragile and not very practical (Vacheron only made three caliber 10726 movements and then gave it up).

This is not to say that the Bulgari Octo Finissimo Ultra is a watch that is intended for anything even remotely resembling wide distribution – Bulgari is making ten of them, in a limited series, and Fabrizio Buonamassa Stigliani says that it was by far the most difficult project that they’ve undertaken. He also says that the watch probably could have been made thinner, mentioning 1.50mm overall as a possibility, but that this runs the risk of sacrificing an acceptable level of practicality.

I know I’ve thought this before, and Lord knows if Bulgari’s output over the last eight years has taught us anything it’s that you shouldn’t assume anything about the unbreakability of records, but it is very difficult to imagine anyone besting the Ultra for a record in thinnest mechanical watch ever, and indeed other than bragging rights I can’t imagine why anyone would bother to try at this point.