Introducing: It’s Like The Illuminati … But So Much More Chill 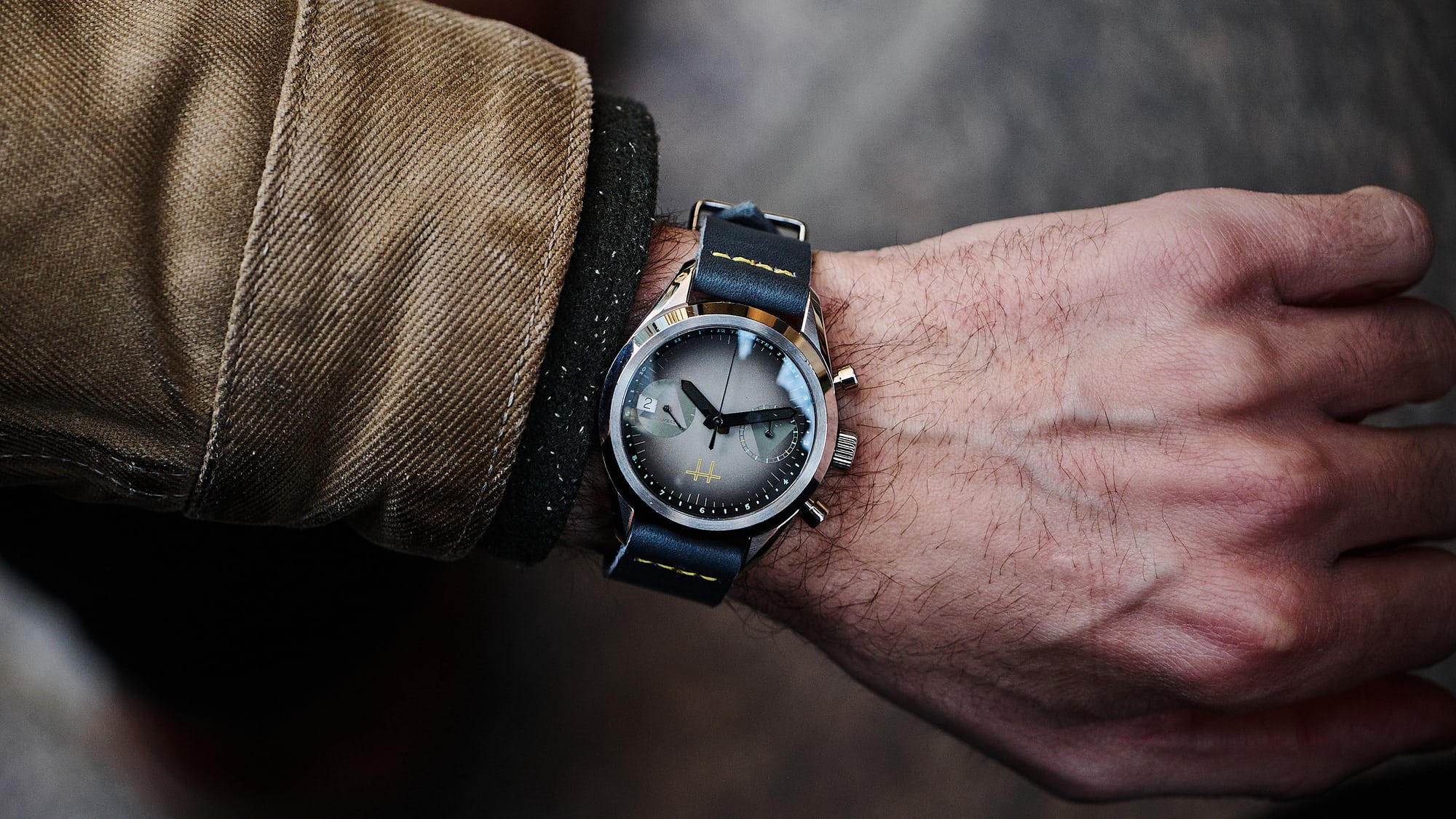 A secret society shrouded in mystery and tradition since its founding by Bavarian professor Adam Weishaupt in 1776, the Illuminati – wait, sorry, wrong story.

This, right here, is the Chilluminati, and yes that’s its real name. The watch follows Haven’s vintage-inspired but relatively standard manually wound Chilton chronograph, bringing something new in design – all in the same case.

The Chilluminati takes inspiration from the Omega De Ville Chronograph ref. 146.017, one of the rare watches where the designers put a date window at 9:00 and walked away like they hadn’t just offended half the commenters on the internet. And they hadn’t – it was 1969, the internet didn’t exist, and they could do whatever they wanted.

Here in the present day, Haven still pretty much acts that way. The brand exists simply to make cool products that satisfy the tastes of founder Weston Cutter. The Haven ethos includes counter-intuitive design choices like replacing the company name with a luminous logo at six o’clock. The faded gray-gradient dial has a luminous oscillating minute track that ebbs and flows from the dial’s edge, where there’s a raised telemeter chapter ring. Then there’s the ominous handset filled with black Luminova, with lumed triangles in the subdials that give the Chilluminati its name.

The Chilluminati is, like all of Haven’s watches, hand-assembled in Indiana – it also ships with blue straps made of Midwestern leather from SB Foot Tanning Company, cut in Indiana and hand-assembled in Minnesota. It comes with a vintage-inspired metal bracelet, as well, easily swapped thanks to the drilled lugs, and it’s all packaged in a recycled cardboard box and accompanied by a manual featuring art and poetry from Midwest-born artists.

If you read Cole Pennington’s One to Watch article featuring Haven you’ll know the brand doesn’t take itself too seriously. Its first watch, the Chilton, referenced the nostalgia of the manual-wind chronograph’s heyday in both design and size, with experimentation and color that was refreshing but not outlandish.

Did I say “not outlandish?” Haven followed up with a tie-dye version called the “Chilllton.” The watch was Haven’s attempt to imagine a colorful, more easy-going world amongst the bleakness of the pandemic.

When Cutter told me he was thinking of calling the next watch the “Chillumninati” I thought he was kidding. I hoped he was kidding. He was not kidding. But it works for a brand that doesn’t want to be too serious – it just wants to be “good.”

The Chilluminati isn’t a surprise to those who have followed Haven on Instagram. Early pictures of dial prototypes and blurry posts teased the luminous dial and black lume hands. But it wasn’t obfuscation to build hype. They were the kind of blurry photos that you take with a phone because you’re excited to share something cool you found and, damn it, lume shots are hard. It’s pure unadorned excitement.

Cutter allowed me to go hands-on with a prototype of the watch in January to be inducted into the secret rituals of the powerful society – I mean, see what I think about the watch – and it’s one of my favorite more affordable watches of recent memory. The dial is striking and gives a sort of “A. Lange & Söhne Lumen” vibe. Date-window truthers be damned, it’s different and I admire Haven for pranksterishly interrupting the subdial geometry. If any date window drives people insane, why not put it at 9:00, just to see what happens?

Omega isn’t the only watch company to experiment with a date at nine, but apart from destro (left-handed) versions by Panerai, Sinn, and a few others, the list is pretty short. Shorter still is the list of date-at-nine chronographs. The prominent example is Heuer’s Carrera Dato 45 ref. 3147, which predates the Omega. With so few other examples, I see it as a creative design that catches attention. It works for me.

I have a soft spot for idiosyncratic watches. And as a Wisconsin-born fan of triangles – mostly cheese and cheese-shaped headwear – not to mention Midwestern art and artists, I appreciate what Cutter is doing to celebrate the region. Even though the watch is inspired by a 1969 design, the neon colors and dark black hands with gray faded dial feels very ’80s or early ’90s. This watch would’ve perfectly matched my childhood neon ripstop nylon wallet with velcro, which I stashed in my sock drawer. Why did I ever switch to using real banks? That wallet was so much cooler.

The Haven Chilluminati will rise to power – I mean be available for preorders – for $1,999 starting today, as a limited edition of 70 pieces, with delivery expected in June.

Thanks to James (@waitlisted) for his guidance with lume photos.